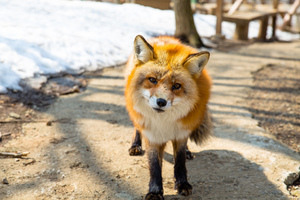 Sitting at the base of Japan’s lush Mount Zao, the Zao Fox Village provides a home to over 100 crafty, bushy-tailed vulpines that are allowed to run free and cute amongst the visitors and religious offerings that pay homage to their mythic stature in Japanese culture.

Founded in 1990 the “village” allows guests to experience life in a world gone mad for foxes. The refuge contains six different species of vulpine canines in an array of shades. While the traditional Japanese Red Fox definitely rules the roost (so to speak), there are also black foxes, platinum foxes, and arctic foxes.

There are also a number of other animals like rabbits and baby goats to pet and feed in the first section of the sanctuary as well as some caged foxes. It is not until visitors move into the large free-range portion that the real fox army comes out. Small amounts of food can be purchase to offer the animals, but since the foxes are still essentially wild dogs, the staff encourages people not to hand feed the beasts, but rather toss the snacks to the ground lest they get nipped. This is not to say that they are frightening, in fact they are known to follow guests like a loyal pet after being fed, although this is more due to there hope of another meal than out of any emotional affection.

There are a number of traditional torii gates leading to the village and one standing within which allude to the fox’s place in Japanese mythology where the clever animal is seen as an agent of the god Inari. This decoration see,s especially appropriate since standing among so many furry, chirping little beasts may just be so cute as to count as a religious experience.