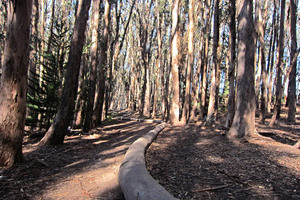 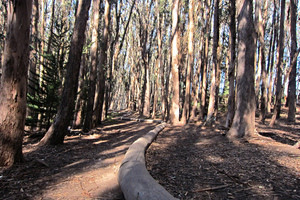 The woods that cover San Francisco’s Presidio are only a little over a century old, planted in the late 19th century by the U.S. Army. In 2011, Scottish artist Andy Goldsworthy made a new intervention on this now thriving woodland — an atmospheric secret path through its trees.

“Wood Line” is a snaking sculptural installation of eucalyptus trunks and branches, covertly following Lover’s Lane, the oldest footpath in the Presidio. This eucalyptus grove planted decades ago was once infiltrated by cypress trees which later died out, leaving a void in the woods, Goldsworthy filled this with his own fallen dead trees, rescued from construction in the Presidio, referencing the life cycle of nature. He described “Wood Line” as something that “draws the place,” and like much of his earth work that incorporates natural materials from the landscape around it, this is meant to decay over time. Walking the shaded curves and turns of “Wood Line” takes you up and down a slope, the end and beginning of where art and nature begins never quite clear.

This installation presented through the Presidio Trust and FOR-SITE Foundation follows Goldsworthy’s nearby “Spire” sculpture from 2008 that stands tall with its salvaged wood, along with the 2013 “Tree Fall” and 2014 “Earth Wall.”