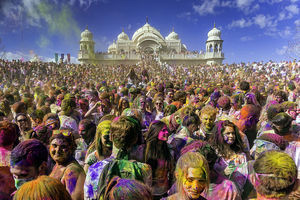 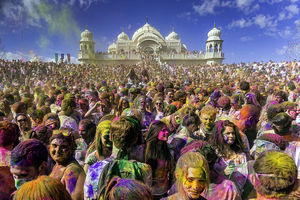 Utah is no stranger to temples. After all, it’s the world headquarters of The Church of Jesus Christ of Latter-day Saints, which has built temples dedicated to God throughout Utah and all around the world. But this temple is different. The Sri Sri Radha Krishna Temple, built by local devotees of the International Society for Krishna Consciousness (aka the Hare Krishnas), has brought a small slice of Hindu devotion to the rural heartland of staunch Mormonism.

Charu Das first visited Utah in 1975, when he traveled to BYU to sell books for the Society. Falling in love with the landscape, he and his wife eventually returned to Utah to settle permanently and build a temple to minister to the sorely underrepresented population of Hindus. To this end the Sri Sri Radha Krishna Temple was constructed in the community of Spanish Fork in 1998. Modeled in the traditional domed style of many other Hindu temples, the idiosyncratic house of worship stands in stark contrast to the gothic temples and utilitarian LDS wards placed all over the rest of the state. In addition to the grand hilltop temple, the grounds contain a large natural amphitheater with room for thousands of congregants to gather, which is a good thing considering what a destination it has become.

Since it opened the temple has attracted devotees, seekers, and the merely curious to participate in the annual Holi festival, visit the llamas and cows in the animal park, eat lunch at the vegetarian buffet, or even enjoy the Sunday Love Feast. The Holi Festival, known to most as the Festival of Colors, is a particular draw, becoming the largest such festival in world with thousands of people showing up to throw brightly colored sand at each other and take new pictures for their social media and online dating profiles.