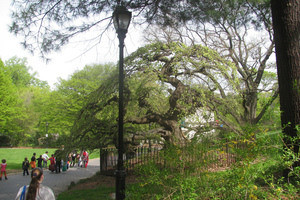 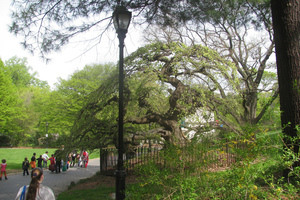 The strangest tree in Brooklyn may be the gnarled branches of the Camperdown Elm near the Prospect Park boathouse. Its branches grow parallel to the ground instead of up, requiring extra support, so gazing up from beneath it is like standing beneath a giant bonsai.

Back in the 1960s, this oddly beautiful tree was almost torn down and only got its salvation through a famed poet. The tree is one of the few in the world grown from the Earl of Camperdown’s Scottish estate, which all share the uniquely horizontal growing tendencies. It was planted in Prospect Park in 1872, just a few years after the park opened in 1867, one of the many flora and fauna gifts bestowed on the elegant green space.

Unfortunately, over the decades the elm was neglected. A hole in its trunk was shoddily patched with concrete; rats and ants infested its wood. When doom seemed imminent, renowned poet Marianne Moore stepped up to be the poor, weird tree’s savior. She rallied the public and helped start the Friends of Prospect Park to promote conservation of the park at large, which had in general fallen into some disrepair. In 1967, she wrote a poem in the Camperdown’s honor:

I think, in connection with this weeping elm,

of ‘Kindred Spirits’ at the edge of a rockledge

in Asher Durand’s painting of them

under the filigree of an elm overhead.

No doubt they had seen other trees—lindens,

maples and sycamores, oaks and the Paris

street-tree, the horse-chestnut; but imagine

their rapture, had they come on the Camperdown elm’s

massiveness and ‘the intricate pattern of its branches,’

arching high, curving low, in its mist of fine twigs.

The Bartlett tree-cavity specialist saw it

and thrust his arm the whole length of the hollowness

of its torso and there were six small cavities also.

Props are needed and tree-food. It is still leafing;

still there. Mortal though. We must save it. It is

Moore, then in her late seventies, died in 1972. But thanks to her the tree lived on, a thriving memorial to this day for her dedication to the park and this lonesome elm.