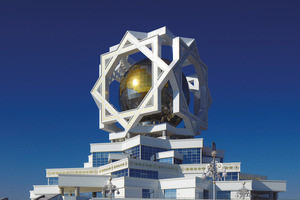 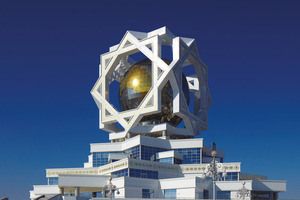 The white marble city of Ashgabat, Turkmenistan is packed to the borders with strange architecture and puzzling statues. One of the most surreal sights in the city is a government building known as the Wedding Palace, which is topped by a massive, geometrically-caged disco ball globe.

Built in 2011, the Wedding Palace is a civil building, but it looks as though it was created by a wealthy eccentric. The lower floors of the white and gold structure are star-shaped and stacked in a staggered fashion so that their points do not overlap. Atop the initial floors is a huge globe that features gold maps of Turkmenistan. The oversized disco ball is enclosed by a frame of eight-sided Turkmen stars.

Inside, the building delivers essentially what its name would suggest, acting as both the office where newlyweds can legally register their union, as well as a venue in which to hold the ceremony. There are 11 floors in the complex, all devoted to getting people hitched. The grandest hall in the structure, known as the “Shamchyrag” is located smack in the middle of the giant globe.

Unique to the Wedding Palace, couples who wish to tie the knot in the opulent castle must have their photo taken in front of a portrait of the President of Turkmenistan, Gurbanguly Berdimuhamedow. Who better to feature in the pictures of your special day?