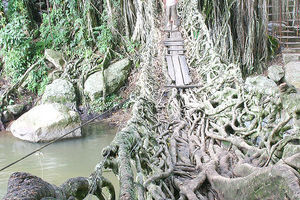 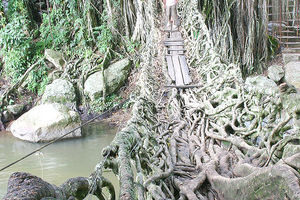 Extending over the Indonesian Batang Bayang River, the slowly growing Jembatan Akar root bridge (Jembatan Akar means “root bridge”) is made entirely out of the naturally growing roots of two banyan trees that have been slowly cultivated to knit into a walkable span.

The span was first conceived of by a local teacher who wanted to give his students from a village across the river to have an easier time getting to his classes. To start the bridge, he put a bamboo frame in place and began wrapping the ever-growing roots of the large banyan trees on either side of the water along the frame. Ever so slowly, the bridge began to take shape.

The project began in 1890 and took 26 years of carefully-tended growth to become sturdy enough to support anyone. The 100-foot span has since been shored up and reinforced with wooden planks and metal cables as well as becoming stronger year after year as the massive roots of the still-living trees continue to grow. Guide lines have also been added to provide additional support for visitors.

Unfortunately the original creator of the bridge is no longer alive to see what has grown from his simple idea, but thousands of visitors and commuters each year have him to thank for creating one of the most curious bridges in the world.