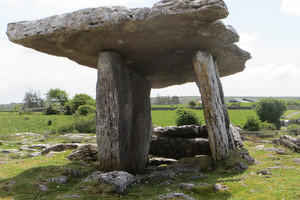 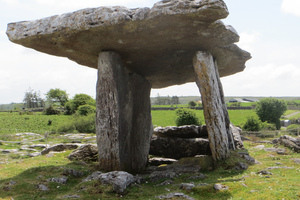 Some call it an Irish Stonehenge. Locals in County Clare, Ireland look on the Poulnabrone dolmen as just another part of the landscape – no different from the low stone ahistorical fences which have boxed up the low rolling land for as anyone cares to remember.

The meaning of the word “Poulnabrone,” is up for debate – some say it means “the hole of the quern stones,” but the more popular translation of the original Irish is “The Hole of the Sorrows.” The structure – called a “dolmen,” or portal tomb – consists of three portal stones supporting a slightly angled capstone, pointing down to a thicker block like a giant’s welcome mat. Poulnabrone is the only standing structure in sight set against the stark backdrop of the Burren, a massive region covered in fossil-filled Karst limestone formed some 350 million years ago when much of Ireland was covered by a tropical sea. The area is now a national park.

The limestone landscape is so vast and barren that it prompted one Cromwellian officer to remark that “it is a country where there is not water enough to drown a man, wood enough to hang one, nor earth enough to bury them.” Though it made crop-based agriculture virtually impossible, the limestone is nutrient-rich, and encourages tufts of hardy grass growing up between its cracks – this, as the officer also remarked, kept the cows fat even while their owners starved.

Authorities excavated the dolmen between 1985 and 1986 and discovered the remains of at least 16 and possibly over 20 individuals, some adults and some children along with stone tools, jewelry of quartz and bone, and pottery. Though Neolithic inhabitants likely built the dolmen between 4200 and 2900 BCE, some archaeological evidence suggests the area was used as a grave site into the Bronze Age, and likely held ritual or territorial significance well into the Celtic period.

Remarkably similar structures – most classified as dolmens – remain standing throughout the world, from India and the Koreas to Africa, Spain, and the British Isles, all dating from the Neolithic. Poulnabrone remains one of the most accessible – almost visible from the Corrofin Road – as well as one of the most impressive, its solidity against the otherwise blank landscape seeming to magnify it, and the angle of its capstone suggesting the work of Frank Lloyd Wright more than Stonehenge.

The site remains largely unblemished by tourist-traps or excessive protection: a few signposts detail the site’s history and a low rope rings the dolmen itself. However, given the site’s remote location and the absence of light pollution, the nearby gravel carpark has made Poulnabrone a favorite haunt of stargazers – not unlike, perhaps, the portal tomb’s neolithic architects.