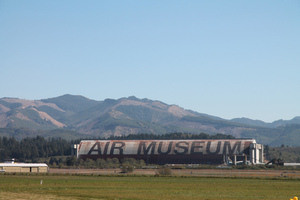 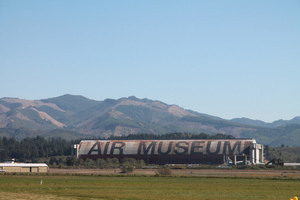 The former blimp hanger that now houses the Tillamook Air Museum is known as likely the largest wooden building in the world, and is currently home to a huge private collection of rare and restored aircraft, although the upkeep of the massive structure may mean that the museum is not long for this world.

Built in 1942 as “Hanger B,” the long arched structure was originally built to hold titanic airships in its cavernous wooden belly. It originally had an identical sister site, “Hanger A,” but the tinder-built structure burnt down in 1992, leaving the B hanger alone. After the military discontinued use of the hanger, a privately-owned collection of airplanes was moved into the hanger and the side of the structure was emblazoned with the words “Air Museum” in letters a hundred feet high. The impressive collection included a number of planes from World War II as well as stranger aircraft such as the rotund, squat-faced ship known as the “Mini Guppy.”

Unfortunately the upkeep of the thousand foot long hanger bay is not cheap and over the years it became too much for the museum to bear. In the late 2000s a large portion of the collection was moved to a second site in Madras, Oregon and the largest blimp manufacturer in America moved into part of the building.

The Air Museum continues to operate on the site and will continue to until their lease ends in 2016. After that, the future of the museum and the hanger itself are up in the air.