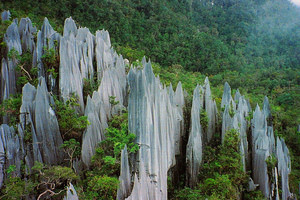 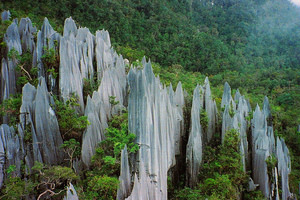 High atop the Malaysian mountain Gunung Mulu is an impressive alien landscape made up of sharp rock spires that rise up out of the surrounding jungle like spikes of angry earth.

The climb to the Pinnacle of Gunung Mulu is gruesome and dangerous, so much so that the national park is sometimes used by the Malaysian Army for training. However those who are daring enough to make the trek to the top of the mountain will be rewarded with one of the most unique and stunning vistas in the world. The tall stone spikes known as the Pinnacles of Gunung Mulu are stark karst formations that were created as the soft limestone eroded away across millennia. Hidden so far up the mountain, the formations are relatively untouched by man and the only people to be seen for miles are other pilgrims to the bizarre bit of topography.

It usually takes a couple of days to reach the rock outcropping that serves as a viewing platform for the Pinnacles. Along the way hikers encounter pitcher plants and toucans along with the grueling terrain. However ladders and railings have been installed to help with the trek as much as they can. The park at large is also home to a number of large caves that make an excellent accompaniment to a visit to the Pinnacles.