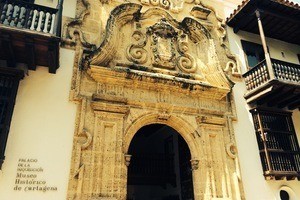 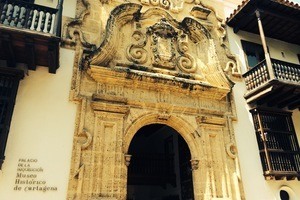 The Parque de Bolivar located in the historic El Centro neighbourhood of Cartagena, is one of the ancient city’s most popular relaxation spots. Here in the leafy shade offered by the palm trees, and surrounded by cooling water fountains and tropical birds, Cartageneros meet to waste away the afternoon, playing chess and sipping coffee from the street vending tintos.

It’s also home to some of the city’s most beautiful examples of Spanish Colonial architecture, one of the prettiest examples of which takes up the southern side of the square. Built in 1770, it features a grandiose entrance built in the Baroque style, long wooden balconies covered with pink bougainvillea, and an ornate cast iron fence. The stone entrance gives way to a lush courtyard filled with palm trees, detailed tile work and bright yellow plaster walls. But this 18th century palatial mansion hides a dark secret, a clue to which is to be found on the side wall around the corner to the main entrance; a small window with a simple crucifix above it bears the legend, “Ventana de la Denuncia.” Here in this tranquil setting, heretics would be denounced and led inside to meet their fate. For this beautiful building was the torture palace of the Spanish Inquisition.

Under the innocent sounding name of the Court of the Holy Office, the Spanish Inquisition carried out its gruesome work until independence from Spain was won in 1812. Walking into the courtyard, the first building encountered was the secret prison called the House of Dungeons. Here, denounced heretics would await their judgement. Torture was used not as a punishment itself for heresy but to obtain a confession which the Inquisitors believed was necessary to bring the heretic back to faith. The Inquisition’s principal purpose was to defend and protect deemed threats to the Catholic Church, including blasphemy, witchcraft, and heresy. Once a confession was signed, the victim was sentenced to death in a public auto-da-fé in the courtyard outside.

Today the palace is open as a museum, wherein many of the grisly tools used to extract confessions are on display. The principal method of torture was the strappado, where the victim was tied with their hands behind their back and suspended in the air whilst a series of weights and drops were added. The other infamous torture method was the rack. Often just watching another victim being stretched on the rack was all it took to obtain a confession. The museum also features other such disturbing relics as thumb screws, the head crusher, and an iron collar covered in lethal spikes.

One of the largest groups targeted by the Inquisition in Cartagena were supposed witches. However the persecution of witches amounted to little more than the vilification of women through trials where victory for the accused was impossible. A notice on the wall of the museum lists the questions the accused faced, amongst them, “What evils have you caused and to whom?”; “What words do you pronounce when you fly?”; and “Why does the devil cause you blows at night?” Of the over 800 trials which took place at the Palacio de la Inquisición, not a single person was ever found innocent. Walking through the museum, past the infamous witches ducking stool, and into the leafy courtyard beyond, the Inquisitor’s guillotine still stands.

Whilst the last official victim put to death by the Inquisition was in 1834, the organization actually still exists today as part of the Catholic Church. Ready to root out heretics, it is known as the Sacred Congregation for the Doctrine of the Faith. A visit to the museum in Cartagena is a darkly disturbing one. The square outside, with its statue of Simon Bolivar, the leader of Colombia’s independence from Spain, and the building itself, are some of the ancient city’s most beautiful spots, but inside, dark artifacts from a disturbing chapter in the history of Cartagena await.