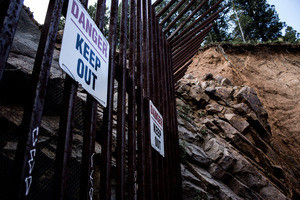 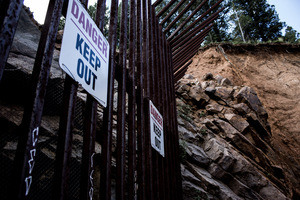 The two remaining (three if you count the collapsed tunnel) Gold Camp Road Tunnels set into the hills of Colorado Springs’ Bear Creek Park are said to be severely haunted, and while this is just superstition, the threatening claws of the fence guarding one of the tunnels isn’t doing anything to discourage the stories.

Many of the locals in the Colorado Springs area are familiar with the legends surrounding the arched Gold Camp rail tunnels. Originally there were nine of the passageways dug into the hills, but as railroad travel in the area dwindled the tunnels were closed until there were only three, which were left open for automobile traffic. According to the most prevalent folktale, one of the remaining tunnels collapsed while a school bus full of waifs was driving through it killing the driver and the entire compliment of kids. leaving their unquiet little spirits to linger around the tunnels. People have reported everything from tiny hand prints in the dust on their cars to being scratched and groped by unseen spirits.

In reality, one of the three tunnels did collapse, and today the other two are just parts of dirt roads surrounded by park land. The collapsed tunnel has been blocked off with a black steel fence adorned with ominous “Keep Out” signs that look like they are just begging someone to fabricate an outlandish horror story about the site. Anyone brave enough can still cross through the remaining tunnels, and listen for the ghostly giggles of the (probably not) dead.