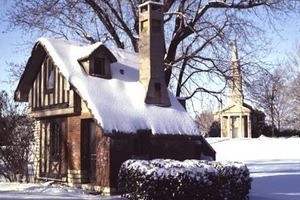 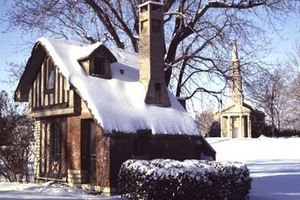 Built in 1931, at the inception of liberal arts school Principia College, the  “Sample House,” or “Mistake House” as it is more commonly known today was created as a sort of Frankenstein building showcasing a wide variety of materials and styles for the builders to work from.

The original Principia College dorms were designed by noted architect Bernard R. Maybeck who set out illustrate a different design for each of the different housing buildings he was creating. Since Maybeck did not live near the site and spent months away at a time during the construction, he personally supervised the creation of a little sample house that the tradesmen who were working on site could use as a reference for the various design styles and materials he had planned. The resulting edifice looked like a strange homunculus cobbled together from sections of different buildings. Half of one wall might be made of brick, while the other half is a construction of timber and concrete, while still another portion might be made of stacked stone. Even the roof was created using a variety of materials.

When the dorms were finished, Maybeck’s varied styles were kept to their respective building, giving each one its own character that still shows through to this day (this also goes for the school’s chapel which Maybeck also designed). Maybeck’s sample home also survives, although no one lives in it, although its bizarre character also continues to show, standing as an odd monument to the innovative mind of its architect.