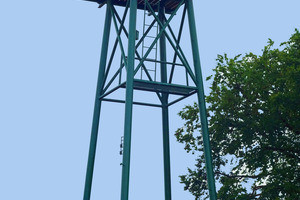 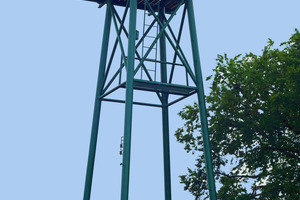 Erected in 1954 in response to the perceived threat of nuclear air raids Seattle’s Phinney Park Air Raid Tower is the only remaining example of the 21 sirens that once blared out across the city during nerve-wracking weekly tests.

The tower is one of the few remaining Cold War air raid towers not only in Seattle, but in the United States at large. The warning tower was topped by the most powerful siren ever built: a 331-cubic inch, 180-horsepower, 12-foot long, 6-foot high Chrysler gas V-8 Hemi engine that could push out a blare that could be heard for miles around. The siren no longer works, but up until the 1970s, it sounded every Wednesday at noon as part of routine testing that would see children diving under their desks.

Since the end of the Cold War, most of these installations and car-sized sirens have been scrapped, but the tower in Phinney Park managed to survive. The tower was sandblasted and repainted in 2006 and is now a Seattle historical landmark.

Since 2014, the tower has been put into service suspending the Phinney Neighborhood’s five-meter-high, 7,500 LED “GloCone” which lights up like a modern, neon Christmas tree from dusk to dawn between Thanksgiving and New Year’s.