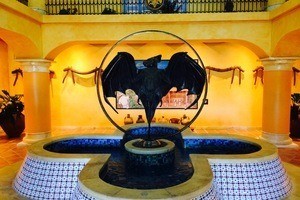 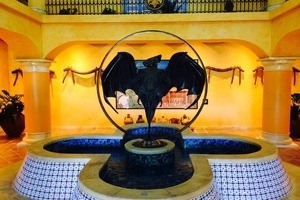 On the outskirts of the working class barrios of Cataño, Puerto Rico, lies an oasis for the discerning cocktail sipper, the Casa Bacardi. Once inside the giant iron gates adorned with the distinctive bat emblem, the world’s largest Bacardi distillery more resembles an exclusive country club. The lush manicured lawns and tropical palms decorated with modern art sculptures, provide the perfect canvas for the beautiful Art Deco “Cathedral of Rum” building.

Offering tours around the distillery where over 100,000 liters of rum are produced every single day, the journey to the Casa Bacardi itself is worthwhile. Beginning at the docks of the old Spanish colonial city of San Juan, the ferry service, La Lancha de Cataño takes you across the Bahîa de San Juan for just 50 cents. Upon disembarking at Cataño docks, a team of enterprising Puerto Rican citizens run a shuttle service in old school buses to the Casa Bacardi for just a further $3.

Despite being one of the worlds largest brands, Bacardi is still a family run company. Founded by Don Facundo Bacardí Massó, a Spanish immigrant to Cuba in 1830, he created a unique method of distilling rum that turned it from the drink of choice for Royal Navy tars to a refined spirit. Today Bacardi is made almost identically to Don Facundo’s original secret process of fermentation, distillation, and charcoal filtration.

His first distillery in Cuba opened in 1862. The building’s rafters were home to a family of fruit bats, from which he created the distinctive Bacardi logo. The Cuban Independence wars of the 1890s saw Don Facundo’s eldest son imprisoned and eventually exiled from Cuba, however the conclusion of the war in 1898, and the introduction of Coca Cola to Cuba by the US troops, produced one of the world’s most simple and popular mixed drinks, the Cuba Libre!, or to give it its more mundane name, a Rum and Coke (with a slice of lime). As Bacardi grew more successful, further factories were opened in Mexico and Puerto Rico. But the Cuban unrest of the 1960s saw the Bacardi family leave Cuba for good, bringing their distillery in Puerto Rico to the fore.

Today, tours around the elegant, leafy Casa Bacardi show some aspects of the secret distillation process, and a well appointed museum features examples of the very first Bacardi bottles, and some of the over 500 medals it has won.  The tour concludes with an outdoor bar where samples of Don Facundo’s historic rums can be enjoyed. The highlight of a visit to the Casa Bacardi though is the distilling building itself, one of the most glorious examples of tropical Art Deco architecture to be found anywhere in the Caribbean.