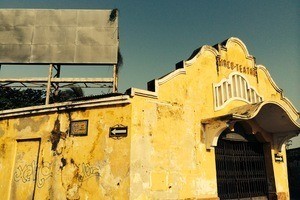 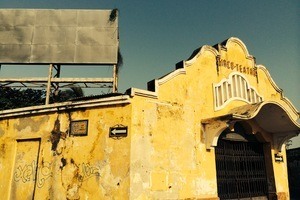 On the outskirts of the old San Diego neighborhood of Cartagena, Colombia, a once vibrant institution of the city is gradually falling apart. Nestled up against the ancient walls built to protect the colonial city against marauding pirates and the invading forces of Sir Francis Drake, lies the abandoned bull ring of Cartagena de Indias.

Called the Circo Teatro, it used to be an integral place for entertainment in one of Colombia’s most historic and picturesque cities. The “Circus Theatre” held bull fights, as well as operas, plays, and motion pictures until it closed its doors for good over 30 years ago. The controversial history of bull fighting in Colombia traces its roots to the conquest by the Spanish in 1533. Named for Cartagena in Spain, the ancient port town soon became a vital outpost for Spain’s colonial ambitions in South America and the Caribbean. And Spanish traditions soon embedded themselves into the fabric of Colombian society, including the Corrida de Toros.

Whilst bull fighting has rightly waned in popularity in Spain, with Catalonia leading the move to ban the blood sport in 2012, the spectacle is still hugely popular in Colombia, but is dominated by similar controversy. In 2010, bull fighting was banned in Bogota, the nation’s capitol, only for the ban to be lifted in late 2014, with the city government ruling for “the right to artistic expression” by people who loved this tradition that was “legally regulated.” Bogota’s La Santamaria arena was once again allowed to host picadors, banderilleros, and matadors.

In Cartagena, bull fighting was so popular that it had two arenas, the Circo Teatro, and the Plaza de Torros. Located just outside the city, and next to the football stadium for Real Cartagena, the Plaza was built on a grand scale in 1854 to mimic the Roman Coliseum.  But the Circo Teatro, located in the heart of the bustling city was the main event. It was inaugurated on May 17th, 1930 by two of the world’s pre-eminent bull fighters, the great Malaga torero Bernardo Muñoz Carnicerito and the Mexican Jose Ramirez Gaonita.

The Circo was painted the same vibrant yellow that makes up half of the national flag, representing all the gold found in Colombia. The ticket office and main entrance was on a triangular corner made up of Calle de la Hecluda de Ovejo and Calle de la Serrezuela. Walking down a narrow tunnel lined with porcelain blue and white tile, you would find yourself in the arena, or ruedo. The seats were supported on a wooden infrastructure of three levels, all standing terraces on the first floor, leading up to the covered boxes on the third level. The prices of the seats varied according to whether they placed in the shade or the searing afternoon sun.

Whatever your stand on bullfighting is there is still something haunting about a place of recreation that has gradually fallen into ruin. There have been civic plans to restore the Circo Teatro going back to 2010, creating a new arena for theatre and music, combined with shops and restaurants; plans which have so far come to nothing.

Cartagena is a city best discovered by meandering on foot through the maze of streets which make up the old town. And whilst the main thoroughfares remain packed with visiting tourists and locals alike, this corner of the city remains mostly quiet. Since the last matador left in 1984, the arena has slowly fallen apart. A hidden treasure in one of South America’s most beautiful cities, the rusted gates remain locked while behind the crumbling yellow brickwork, the wooden stands are allowed to slowly collapse and become overgrown with weeds, palm trees, and bougainvillea. What was once the heart of the city has slowly been allowed to fade away until it will just live on in the memories of those who packed its barreras crying toro! toro! toro!