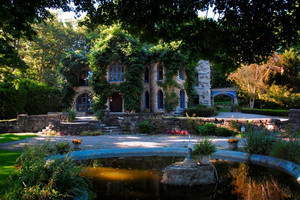 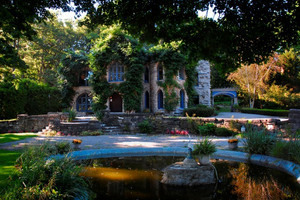 Created to mimic one of the traditional holds of historic Ireland, Beardslee Castle in upstate New York is a strange architectural outlier that has managed to survive multiple raging fires and still operates as a restaurant today (which unsurprisingly claims to be haunted).

The successful Beardlee family first came to New York in the late 1700s and began building their fortune in the rural area by establishing a mill that eventually grew into a small city. While “Beardslee City” didn’t last, the family continued to find success and in 1860, construction began on the castle that would become their legacy. The small three-story manse was modeled after the rough stone and rounded parapets of historic Irish castles, just as though someone plopped one of them down in the middle of the New York woods.

As further generations of the family took over the grounds they expanded the services and eventually brought electricity to the remote area. Unfortunately a fire in 1919 completely destroyed the interior of the building leaving only the replica-Irish shape of the place. The blaze was suspected to be arson, although it was never confirmed. It was eventually rebuilt, but sold out of the family just decades later.

Under new ownership, the castle soon began operating as a restaurant and party space known as “The Manor,” and then “Beardslee Manor,” using the atmospheric castle interior to drum up some business-driving drivel about ghosts that haunted the halls. This era of the castle also ended in a 1989 fire that once again destroyed much of the interior, although this time the space was abandoned all together for a number of years before finally being restored.

Today the castle still operates as a restaurant and venue, lightly hinting at its ghostly hauntings, although it seems as though guests to the eccentric castle should be more afraid of fire.