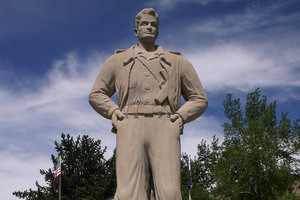 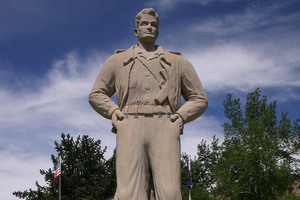 In the 1940s the small city of Idaho Springs, looking to change its image as simply an old gold rush town, came up with the novel idea to capitalize on the then wild popularity of newspaper comic strips, and thus the Steve Canyon Statue was born, although the supposed timelessness of the character may not have held out as well as expected.

Steve Canyon was a prototypical pilot and man of action character created in 1947 by comics legend Milton Caniff. The strip ran from 1947 to 1988 during which time Canyon traveled the world in search of adventure with his lovely or hilarious sidekicks, crowing patriotic rhetoric all the while.

In post-war America Canyon was just the type of upstanding man people could look up too and Idaho Springs wanted in on the ground floor of this exciting new character. The same year the strip debuted, the county officially renamed a small gulch, “Steve Canyon,” inviting Caniff down to the city for an official christening ceremony. Then just two years later, realizing that naming a smallish land feature may not have created the enthusiasm they had hoped for, the city double-down on its Canyon madness and unveiled a statue of the character which was strangely dedicated to, “all American cartoon characters who serve the Nation.”

The Steve Canyon strip continued until 1988 even beyond Caniff’s passing, but interest in the statue waned. However it was never taken down and stands to this day as a bit of an oddity with only an aging section of the community aware of the character’s significance.