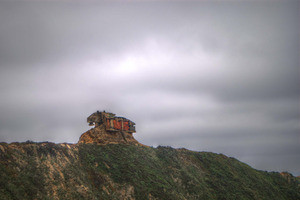 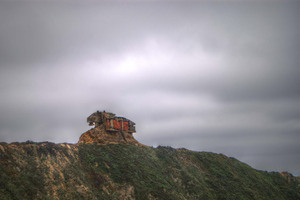 High atop California’s coastal peak known colorfully as Devil’s Slide are the crumbling remains of a squat cement building that looks as though it is about to tip off the edge of the summit and slide into the sea.

The bunker on Devil’s Peak was originally built during World War II as a triangulation and observing station and was once simply a piece of a much bigger set of buildings and facilities. When in service, a watcher equipped with a set of binoculars would keep watch out at sea and if they spotted any enemy ships they simply radioed a massive six-inch gun not far away which would sink them before they got close. Unfortunately, with the advent of more modern missile defenses the station became obsolete and the entire site was abandoned in 1949, leaving an empty bunker atop Devil’s Slide.

The land was eventually purchased by a private owner but the bunker remained on its lonely perch. As the wind coming off the sea has buffeted Devil’s Slide over the years, the earth at the top of the peak has slowly eroded away leaving the bunker looking as though it is teetering precariously on the summit (which it may be).

Today the Devil’s Slide Bunker still sits on private property and is not open to the public, yet that has not stopped graffiti artists from covering most of the surfaces with tags and pieces. By the looks of the bunker’s base its seems like it is only a matter of time before some unlucky artist actually ends up taking the Devil’s Slide right along with the bunker.