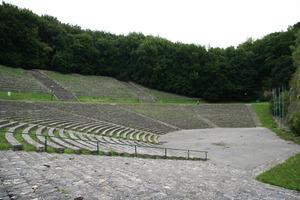 St. Annaberg Thingstätte, one of Europe’s largest man-made, stone amphitheaters – a monument among the infamous ruins of the Third Reich, with a capacity of up to 50,000 – sits at the foot of a pilgrimage site atop a tiny Polish hill.

Nazi Minister of Public Enlightenment and Propaganda Joseph Goebbels, inaugurated the “Thingstätte” or “Thingplatz” movement in 1933, drawing on a vague Germanic Volk tradition of large outdoor gatherings for public festivals and religious rituals. Though never completed on the scale Goebbels envisioned, the “Thing” movement left scores of imposing stone amphitheaters carved into the former Third Reich, many of which still stand. With a capacity reaching 50,000, one of the largest Thingstätte stands in Góra Świętej Anny, or St. Annaberg, Poland – a town with a population of just under 600, though this swells well into the thousands during four peak holy days during the year, particularly on the feast of St. Anne – the patron of the village, whose relics are enshrined in the Franciscan monastery there.

The Nazi regime constructed the Annaberg Thingstätte in an abandoned quarry at the base of Góra Świętej Anny, the hill which shares its name with the town, between 1934-1936; by 1938, they had completed a circular fortress-like mausoleum on an abrupt cliff overlooking the amphitheater, honoring the Freikorps who had fallen in the 1921 Battle of Annaberg. One can still buy postcards in St. Annaberg showing the “Thing” as it stood then – stark and deforested, with long swastika banners flapping over the empty seats.

The locals dynamited the original Nazi mausoleum in 1945 and replaced it ten years later with an open-air monument to the Polish rebels who fought and died throughout the 20th century, designed by the sculptor Xawery Dunikowski. This still stands – as does the Thingstätte, slightly weed-choked and not regularly repaired, but just as impressive in its sweeping scope as it must have been in 1936.