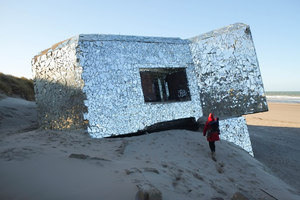 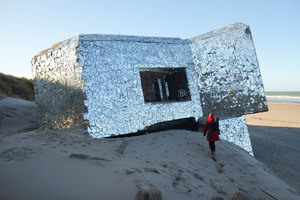 When German forces took control of the historic French Fort des Dunes they installed a series of typically imposing seaside bunkers as part of their larger “Atlantic Wall,” but today their concrete fortifications have fallen into ruin and are being used as the canvas for ambitious street art.

Built back in the late 1800s, the Fort des Dunes was not a big player in World War I, but during World War II it saw a great deal of action that left it damaged and in enemy hands. Once the Germans moved in they set to repairing the damage they had done and expanded the defense out to the shore of the Atlantic Ocean. Impenetrable cement bunkers were built in a long row expending the length of the fort.

At the end of the war after the Germans were routed from the area, the fort was put into use by the military bureaucracy for a time, but was eventually abandoned in the mid-50s and left to rot. The sea took its toll on the abandoned bunkers the Germans had left behind and they began to fall apart to the extent that even when the Fort proper was restored, the concrete additions were beyond repair.

Today the bunkers have been largely commandeered as canvases for street artists, some of whom have gone so far as to decorate entire bunkers in patterns or mirrors just to name a few of the projects.