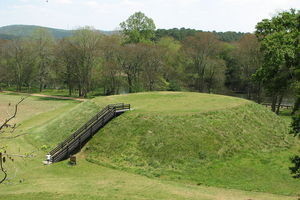 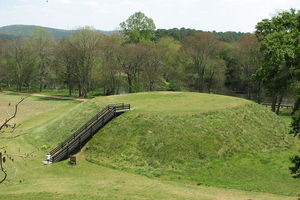 First created over a thousand years ago, what we now know as the Etowah Indian Mounds are a treasure trove of artifacts, bodies, and cultural insight into an ancient culture that is lamentably overlooked by much of history. And less than 10% of them have been explored.

The six earthen plateaus that comprise the Etowah site were constructed in different phases down the centuries creating a sort of sedimentary deposit of cultural artifacts that show how the cultures that lived on the site grew and evolved across the ages. It is believed that the mounds were the work of a culturally advanced people (the Mississippians, despite being located in Georgia) and that their central metropolis once sat on the site. A culture of mound-builders, the people are said to have used the man-made hills both for burial purposes and as raised platforms for the homes of their elders and respected leaders.

By the time the that what many consider to be traditional Native American culture dominated the land, the Mississippians had long since abandoned their city, leaving behind only remnants and mounds to tell their tale.

And a surprisingly rich tale it is too. Weapons, tools, traditional dress, and a variety of domestic items have been dug out of the mounds by archeologists, and according to the state website, that is all after only around 9% of the site has been explored. Etowah my yet provide one of the clearest views of an ancient American people who are generally remembered only in name.