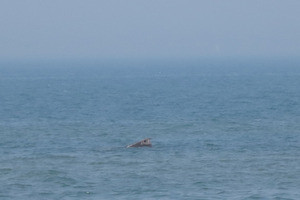 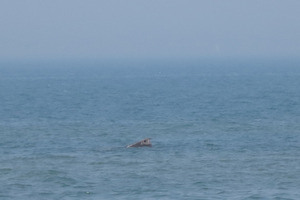 From the shore, the bit of the wreck of the Silver Spray that is visible above water looks almost like a natural formation, but anyone who swims up to it will find that it is in fact the rusting remnants of an old steam boat that sank on the spot, much to the delight of onlookers.

In July of 1949 the Silver Spray set sail to pick up some university students and take them to Indiana to tour some steel mills. Unfortunately the trip never came pass as the Silver Spray ran aground on Lake Michigan’s Morgan Shoals, a massive underwater rock formation that was formed millions of years ago by glacial activity. Once it was apparent that the ship was doomed, the captain and the crew decided to remain with their ship, not even halting the preparation of the evening’s stew. The crew was rescued the next day, but attempts to salvage the ship only caused it to slam against the rocks even more, and the wooden steamship quickly broke in two. In addition, the boiler had been left on and the ship caught fire as it sank making for quite the spectacle. Groups of spectators on shore began collecting the wooden debris as it floated ashore and burnt them in large bonfires. It must have been a delightful night.

Today, nearly a century later, the remains of the Silver Spray can still be seen peeking out of the waters of Lake Michigan. While most of the wooden structure is long since gone, the ship’s metal boiler still juts out of the water. The Silver Spray is the closest shipwreck to the coast of Chicago and is thus a popular diving spot, along with Morgan Shoals in general. Some swimmers even paddle out to the wreck and sunbath on it’s exposed angle. For better or worse, the Silver Spray seems to be bringing more joy to people in death than it ever did in life.