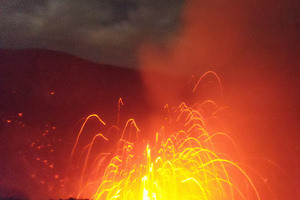 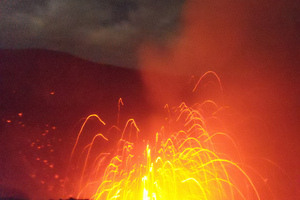 Dominating the silhouette of Tanna Island in the South Pacific is a mighty vulcan mountain of Yasur that, despite having spat fire into the heavens continuously for over 800 years, is surprisingly welcome to sightseers and visitors.

Daring travelers hoping to see a little action while in the Republic of Vanuatu would be hard pressed to find a more active locale than Yasur Mountain. The volcano is a continuous hotspot of magma activity, spitting molten rock into the air above its caldera continuously for centuries. Unlike many active volcanoes, the summit of Yasur is approachable on foot by anyone daring enough to try, becoming a major attraction on the tiny island.

The mountain has become sacred to many of the locals who subscribe to the cargo cult based around the enigmatic man-god John Frum. The figure of John Frum is shrouded in mystery, some saying he is a white American serviceman, while others have described him as a black man in local dress. No matter his true form, to those who believe that he will lead them into a brighter future, he is a god. According to some, John Frum actually lives inside of Yasur Mountain, simply waiting to be reborn.

While it is unlikely that an enigmatic miracle man is living in a state of flaming un-death deep inside the volcano, the fires of Yasur Mountain are nonetheless awe-inspiring.