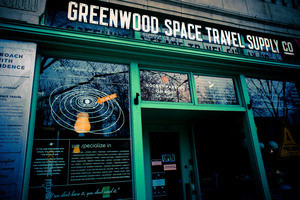 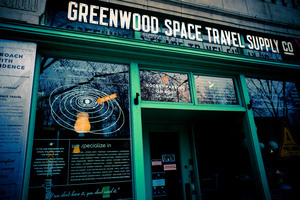 It’s the dream of many a young child to grow up to be a brave, space-faring astronaut, but most of these dreams end up smothered by the grueling realities of the profession. However Seattle’s Greenwood Space Travel Supply Co. works to keep those dreams alive with an assortment of whimsical space-themed items that are all sold in service of a program for young writers.

Much like San Francisco’s pirate supply store and New York’s superhero outlet, the Greenwood Space Travel Supply Store Co. is really just a front for a writing center targeted at kids from 6-18. Even with its altruistic origins the store still manages to create the atmosphere of a world wear reaching the stars is just an imagination away. Visitors can purchase everything from star maps to astronomy books to whimsical toys, whatever serves to spur on young writers’ minds. In addition to all of the items on sale in the store there is also a retro-futuristic spaceship dangling from the ceiling adding to the sense of pulpy wonder.

The center is operated by The Greater Seattle Bureau of Fearless Ideas who were formerly known as 826 Seattle, a group affiliated with the previously mentioned whimsy centers all across the country. The writing center portion of the store is actually reached through a door cleverly disguised as an “Atomic Teleporter” giving the young writers a chance to teleport themselves with more than their imagination.