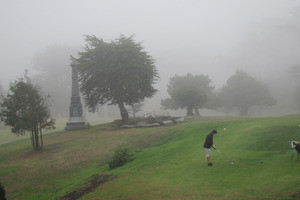 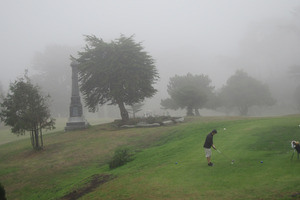 Sitting on the coastal edge of San Francisco, the Lincoln Park Golf Course is one of the loveliest set of links in the area with grand views and lush lawns all around. And in fact it was these same serene qualities that made it the perfect spot for the cemetery that originally sat on the land, remnants of which can still be found haunting the back nine.

The park, which overlooks both the city of San Francisco and the ocean was first established in 1909, and now marks the Western end of the historic Lincoln highway. When the acres of land were annexed as a park, a good portion of the acreage had been used as a burial site during the preceding decades. In addition, a small (three-holes in the beginning) golf course, had been established by some rogue fans of the sport. As the park land took shape, the golf course was made official, but the dead people were a problem.

Luckily the rapid expansion of the golf course helped expedite the relocation of the corpses and their headstones. However, as is often the case with relocated burial sites, the exodus was incomplete and some of the headstones remain on the golf course, which has expanded to a full 18 holes, to this day. It is unknown how many, if any of the original bodies are still mouldering beneath the greens, but the golfers on this course who are convinced their swing is cursed may actually be right for once.