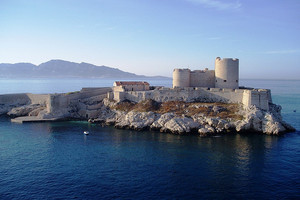 Looming just off the southern tip of France is an imperious looking island that is taken up in its entirety by a fortress complex that was made famous by being featured as a location in the literary classic, The Count of Monte Cristo, and even though that is a work of fiction, the fort has preserved famous cell to this day.

Built in the in the mid-1500s on the tiny island of If, the fortress was originally intended to act as coastal defense station. The fort was built fairly cheaply and carelessly retaining a rough texture on the outer walls of the three-story island defense. Gunnery towers were also built within the walls which remain today as the fortresses primary defining feature. No attack ever took place at the fort and it weathered the centuries nearly untouched save for weather and time.

By the 1800s the space, useless as a fort, was converted to a prison that used its island status as its main escape deterrent. During this time, a range of inmates were committed to the jail ranging from murderers to political prisoners. The conditions ranged from over-crowded dungeon cells for the lower classes to small apartments equipped with fireplaces for wealthy prisoners. The prison held a bit of notoriety thanks to its unique position, but it was catapulted into history when author Alexandre Dumas used it as the jail where his famous Count of Monte Cristo spent over a decade before escaping.

The prison was eventually closed and actually opened to the public as a landmark by 1890. Today, in addition to a great deal of primitive graffiti etched into the bricks by actual inmates, one of the former cells has been designated to have been the one the Count was held in despite the man never having existed at all.