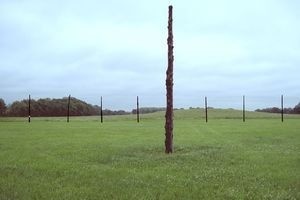 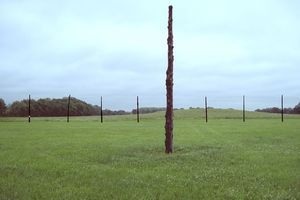 When the ancient postholes that demarcate the orbit of the Woodhenge in Illinois’ Cahokia Mounds State Historic Site were first discovered, they were just that: holes in the ground. However thanks to efforts in the 1980s, the prehistoric timekeeping pattern looks once more like it probably did at its creation.

The holes were first stumbled upon in 1961 and it was only the circular layout of the cavities that alerted researchers to their archeological importance. After the first circle was discovered, four other rings of dug out holes were discovered showing a successive tradition of these constructions. Judging by the orientation with relation to the surrounding mound structures the whole henge was created to mark and measure the solstices and equinoxes. Further testing of samples taken from the pits revealed that sacred red cedar posts would have jutted up out of the holes that would align with the sunrise and sunset to mark the progress of the calendar. Unless the measurements are off, it seems as though only a few of the poles were used to actually mark special landmark dates and many of them were simply in place to create a sense of ritual.

Since the original wooden henges were put in place sometime between 900-1100 CE, the original wooden poles have long since rotted away to dust. However in 1985, a new set of rugged cedar posts were placed in the historic holes creating as exact a replica of what the site once looked like as we are likely to get. Amateur ancient astronomers can still visit the park and witness the wooden markers in action as they line up with the sun a few times a year.