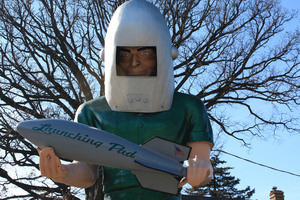 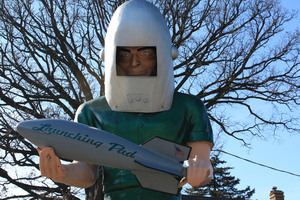 The once ubiquitous “Muffler Men” that once dotted the attractions along Route 66 like giant clones have slowly disappeared over the years, but a few still remain, of which Illinois’ Gemini Giant may be the only one to be decked out like a pulpy rocket man.

Most of the original Muffler Men were created as Paul Bunyan figures, each with the same crooked-arm pose to hold an axe, however many of them were customized to fit the needs of the business or attraction they were representing. Such was the case of the Gemini Giant which was commissioned to stand sentinel outside of the Launching Pad Drive-In, a diner that has been serving the Mother Road since 1960. Given his name in honor of the Gemini space program, the static colossus is unique among his kind. Instead of a flannel and overalls, the Gemini Giant sports a green jumpsuit (still, oddly, without sleeves), and a pointy silver helmet has been added to the figure as well. In place of the traditional axe, the green goliath is cradling a gleaming rocket emblazoned with the name of the diner.

Thanks to the continued success of the Launching Pad, the Gemini Giant has managed to survive while so many of his fiberglass brethren have been lost to the scrapheap. The giant is somewhat of a local celebrity in the area which is understandable given that there are not too many other 30-foot tall retro-astronauts to steal his thunder.

Illinois Week on Atlas Obscura was created in partnership with Enjoy Illinois as part of the launch of the new Illinois Obscura Society. Sign up to find out more about the back room tours, unusual adventures, and incredible parties that Atlas Obscura will be putting on in Chicago and greater Illinois.
via