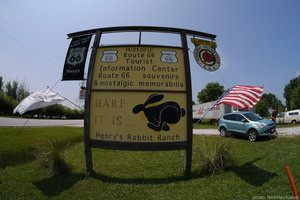 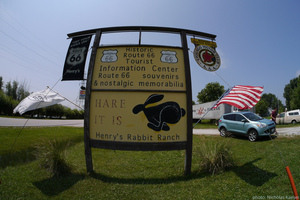 There are a number of wonders along the Mother Road, Route 66, but likely the only one that is so singularly focused on rabbits of all kinds is Henry’s Rabbit Ranch, a roadside attraction that has everything from actual bunnies to Volkswagen Rabbits to a giant fiberglass beast that people can ride.

Created when owner Rich Henry’s daughter came to him with a problem. Her pet rabbits had done what rabbits do and now she found herself in possession of a whole clutch of baby bunnies that she could not look after. Luckily Rich was more than willing to babysit, and soon he fell in love the long-eared beasts. Henry had often thought of opening a Route 66 attraction and the rabbits were just the inspiration he needed. He created Henry’s Rabbit Ranch and started cultivating his little clutch as the main attraction in his very own Route 66 attraction.

After building out his attraction for a few years it is now a complex of rabbit-related sights. The central site is the gift shop where visitors can see the actual animals, but there are also oddities spread across the grounds such as a car-henge made out of Volkswagen Rabbits that are stood up with their noses buried in the dirt. However possibly the most iconic attraction is the giant fiberglass jackrabbit that invites visitors to climb on its back. Even more bizarre are the 30 or so little headstones laying at the giant’s feet where former residents of the ranch are buried.

Much of the wonder of Route 66 has disappeared over the years, but thanks to places like Henry’s Rabbit Ranch, the American love of roadside oddities is still kicking.