in his project euro banknotes bombing Stefanos modifies euros by drawing little human figures onto them in ink transforming the soulless environments into scenes emblematic of the economic and social instability in greece. 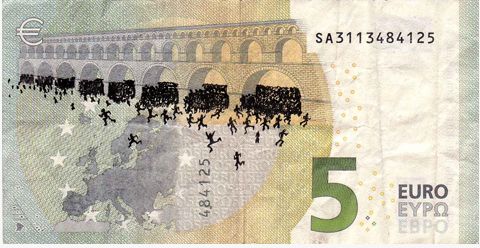 ‘observing the euro banknote landscapes one notices a lack of any reality, whatsoever for the last five years the crumbling greek economy has hatched violence and social decay – so, I decided to fuse these two things. through hacking the banknotes I’m using a european a document, that is in cross-border circulation, including greece – thus, the medium allows me to ‘bomb’ public property from the comfort of my home.’ – Stefanos

Stefanos has been modifying Euro banknotes for an entire year to reflect his country’s economic, political and social problems, Design Boom reports. The artist draws chaotic scenes on the currency with a fountain pen. Each banknote is scanned for documentation purposes and then put back into circulation. 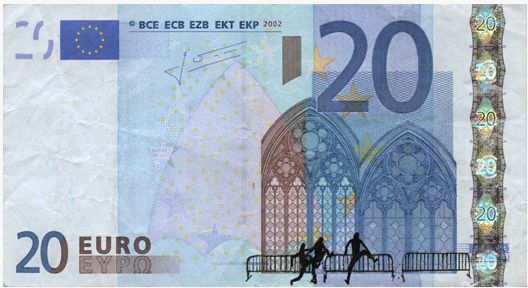 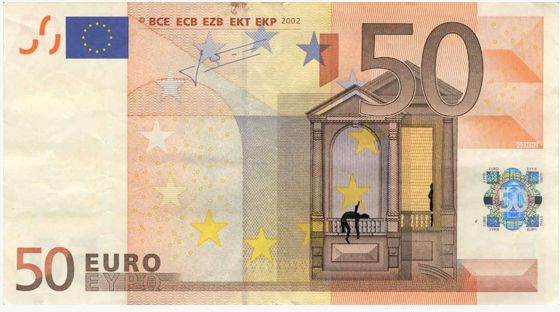 The black ink figures are drawn in situations that explore the themes of freedom, revolution, death and decomposition. Like a €50 note that shows a group of little guys breaking and entering through a window of a mansion.

If you come across a note by Stefanos keep in mind that not only counterfeiting and defacing of money is illegal. Bringing such notes into circulation is also illegal. Best is to put the note onto your wall, thus showing respect to the artist and forcing yourself to throw freshmoney into the circuit.