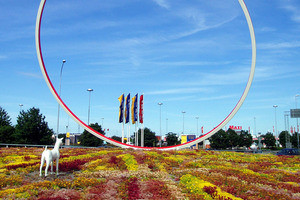 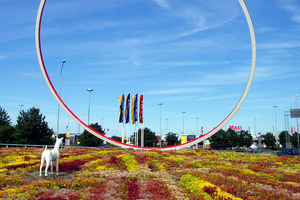 At the time of its creation, no one could have predicted that a seemingly harmless sculptured dog placed in a roundabout in southern Sweden would end up stirring up political controversy and inciting a whole wave of roundabout dogs in the name of free speech.

The strange phenomenon of the roundabout dog began in the Swedish city of Linköping in the second half of 2006. A new roundabout, Nygårdsrondellen, had been opened in the city, and it became home to the art installation Cirkulation II by Stina Opitz. Consisting of a large red circle stood upright with a white concrete dog facing it, the piece was a perfectly unoffensive bit of public decoration.

However, not long after it was installed, the cement pup was vandalized by someone who removed its head. After this the headless concrete dog was removed, to be replaced by a sturdier metal beast. But before the new dog was able to be put in place, an anonymous artist placed a homemade wooden dog in the same place where the original one had stood. Soon, this makeshift canine was adorned with a concrete dog bone, placed by another mysterious artist. News of the mystery installations spread, and it wasn’t long before other homemade dogs started to appear in other roundabouts in Linköping.

The trend didn’t stop in the city either with examples of roundabout dogs eventually appearing all over Sweden before spreading as far as Spain, Germany, England, and Mozambique. The quirky trend was seen by many as a statement about the comparative value of highly-paid public artists and those who toil in obscurity.

The roundabout dogs were a small, but beloved curiosity until 2007 when their existence took on a much more controversial turn thanks to Swedish artist Lars Vilks. The artist had been invited to an exhibition on the theme “The Dog in Art,” and drawing on the controversy of the Danish newspaper Jyllands-Posten’s publication of cartoons depicting Muhammed a year and a half earlier, Vilks decided to draw Muhammad as a roundabout dog. The sketches were withdrawn the day before the opening by the organizers due to security concerns after consulting Swedish governmental agencies about the risks, however Vilks continued to submit his drawing to other institutions, continually being rejected. This started an intense debate in Sweden about freedom of expression and whether or not self-censorship was spreading.

The newspaper Nerikes Allehanda finally decided to publish one of the drawings claiming that it should be possible to “ridicule Islam’s most foremost symbols — just like all other religions'” while still defending “Muslims’ right to freedom of religion.”

A few weeks after Vilks’ drawings had spread, a formal protest from the Iranian government was given to the Swedish consul in Teheran. The Pakistani government soon filed a similar protest and other countries and Muslim organizations were to follow. Swedish flags were burned by angry protesters, a price was put on Vilks head and arrests were made of people accused of plotting to kill Vilks.

Luckily things calmed down after a time and both Vilks drawings and roundabout dogs had had their new cycle. Of course even after the threats stopped, one little concrete dog in a roundabout in Linköping had influenced international relations and sent echoes that spanned continents.