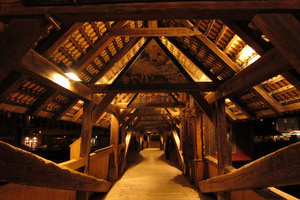 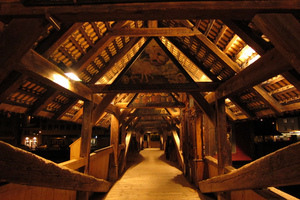 From the outside, Lucerne’s Spreuer Bridge looks to be a peacefully bucolic old-world span, the kind where medieval lovers might have met on a warm spring day, but hanging beneath the covered roof are dozens of historic paintings of skeletons and reapers collecting souls and reminding travelers that every second is one closer to death.

The gable-roofed bridge was built in the 13th century to connect a group of mill buildings to the mainland. During its initial usage the bridge was unique in that the mill workers could simply dump their waste into the river since they were so far downstream. The wooden bridge survived for hundreds of years retaining its peaked medieval style.

Then in the mid-1600s it was decided that the bridge would be spruced up a bit and a project was spearheaded to create a series of artworks forming a Dance of Death cycle, also known as a “Danse Macabre” or “Totentanz” in German. The object of such works was remind everyone that death comes for us all, whether old or young, rich or poor. In the end 67 separate works were painted in the rafters of the covered bridge each featuring at least one skeletal harbinger of death (more often a number of them) coming to drag people to the afterlife. Monks, knights, nuns, and beggars are all seen being taken by death no matter their life.

Walks along covered rustic bridges are often symbolic of peaceful times of beauty, relaxation, and simple living, but the Spreuer Bridge really makes sure that people know they need to enjoy it while it lasts, which probably won’t be that much longer no matter who you are.