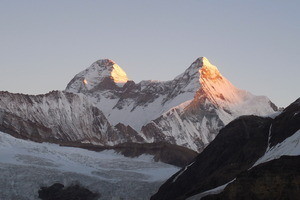 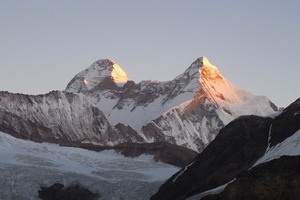 The tallest mountain located entirely within India’s borders, Nanda Devi is as majestic as it is forbidden, and has a history that is entwined with the American Central Intelligence Agency

India’s second highest peak, the “Bliss-Giving Goddess,” Nanda Devi is surrounded by myth and legend. At 7,816 meters (25,643 ft.) above sea level, it has been closed to climbers since 1983 and is surrounded by an impenetrable sanctuary of solitude.

The challenge of getting to one of the most notorious peaks in the Indian Himalayas is that it is protected by a natural boundary of surrounding mountains, many of which are over 6,400 meters tall. This moat of protection is known as “The Sanctuary” and wasn’t first breached until 1934. Nearby peaks are named after different aspects of the Goddess’s folklore: her bodyguards, her “western door,” and “Nanda’s bed” being examples. The higher of Nanda Devi’s twin peaks was first summited by Noel Odell and Bill Tilman on August 29, 1936, becoming the highest peak ever climbed until it was later surpassed by an expedition to the top of Nepal’s Annapurna.

A series of secret CIA missions, conducted in partnership with the Indian Intelligence Bureau, attempted to place a nuclear-powered monitoring device on the top of the mountain in order to listen in on missile activity in neighboring China. This effort culminated in the device being lost near the summit, never to be recovered. The loss of the device and the possibility of it causing radiation poisoning led to the closure of the mountain to climbers for years.

Though the mountain was later reopened for another decade, it was closed again in 1983 for environmental reasons, to form Nanda Devi National Park. The park, along with the adjacent Valley of Flowers National Park, were designated a UNESCO World Heritage Site in 1998. Entry is forbidden to climbers and locals to this day.