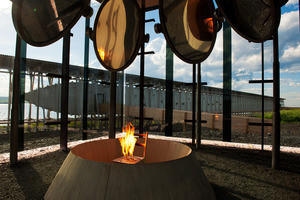 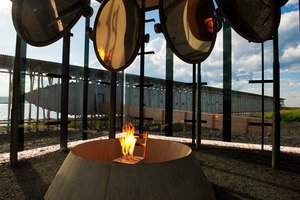 Sitting on the stark, barren coast of the Barents Sea in Vardø, Norway are pair of modern but somber structures known collectively as the Steilneset Memorial which honors the memories of the dozens of people killed during the 17th-century Vardø witch trials.

Designed in collaboration between the architect Peter Zumthor and the late artist Louise Bourgeois, the pair of ultra-modern constructions stand out against the natural coastal landscape yet don’t seem out of place, sharing a brutal kinship with the vistas. Zumthor’s portion of the memorial consists of a pine scaffolding supporting a suspended silk cocoon. Within the cocoon, visitors walk along a 400-foot long oak-floored corridor illuminated by 91 small lights set into little windows, each one representing someone who was killed on suspicion of sorcery. Each window is accompanied by a plaque that also illuminates the story of one of the victims.

Bourgeois’ portion of the memorial is a large box made of smoked glass that sits just to the side of Zumthor’s silk missile. Called, The Damned, The Possessed and The Beloved, the piece was Bourgeois’s last major installation before her death. The darkened glass room contains an endless flame burning atop a steel chair that that itself is nested within a hollow concrete cone. The hot seat is surrounded by a series of mirrors that bounce the eerie light off of each other and the glass walls making the whole room dance with flames.

It took over 300 years for a memorial to be built for those tragically killed in the Vardø witch trials, but given how haunting and perfectly stark the resulting memorials are, it was well worth the wait.