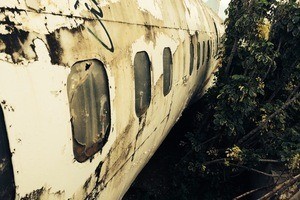 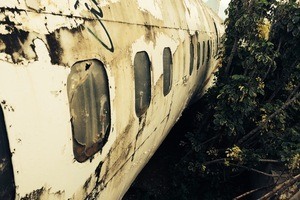 Top of every intrepid explorers list must be to find a ruined airplane hidden away in a tropical locale. Bringing to mind the television show Lost or the 1986 film Romancing the Stone, there is just something haunting about coming across the wreckage of a plane slowly being reclaimed by nature.

Just such a plane lies in waiting on the Dutch Caribbean island of Curaçao. About half an hour drive south of the capital of Willemstad, just north of Kontiki Beach and nestled at the foot of the southern mountains surrounding the salt pans of Jan Thiel lies the remnants of Air Aruba flight P4-YSA.

Climbing inside, all the seats are gone, but the doors and remnants of the airline can still be seen. Overhead panels indicate the old reading lights and stewardess call buttons. Strewn on the floor amongst the derelict emergency oxygen masks, are the signs indicating seat row numbers followed by aisle or window. Walking through the wrecked fusilage it looks like a plane that crashed into the tropical jungle decades ago and where all signs of the passengers have simply disappeared. Walking forward carefully on the bared struts of the fuselage towards the pilot’s cabin, now home to wasps and pink jungle flowers, most of the machinery is still there. Altimeters, air pressure dials, countless electrical switches and fuel pump gauges, just as the pilot left them. The front glass has smashed inwards allowing vines and palm fronds to grow inside over the wrecked cockpit.

The airplane was a turboprop airline originally designed by the Nihon Aircraft Manufacturing Company of Japan. Built between 1962 and 1974, the NAMC YS-11s were capable of carrying 60 passengers, and looked similar to the multipurpose American Douglas DC-3s. The one slowly disintegrating on a small island in the south Caribbean sea was bought and run by the commercial airline Air Aruba. Beginning as a short haul company in 1986, Air Aruba principally ran between the ABC islands of the Lesser Antilles, Aruba, Bonaire and Curaçao. Rising costs led to the company declaring bankruptcy in 2000, by which time the airline was chartering flights to further destinations such as Domino, St.Maarten, and Miami.

The first two planes in its fleet bought in 1986 were the Japanese twin props, registration numbers P4-YSA and YSB. Both of the planes have suffered differing fates. One, YSB currently lies in 40 feet of water in the reefs surrounding Aruba. Damaged beyond repair during Hurricane Lenny in 1999, it was intentionally sunk where it now enjoys a new lease of life as a popular scuba diving wreck. Its twin plane, YSA, ended up in Curaçao. At one point, the broken and wrecked plane, shorn of its wings and twin props had been planned to be used as a restaurant. An adjoining brick and adobe structure on the starboard side of the plane was to house the kitchens, whilst diners enjoyed the unusual setting for their evening meal. But the restaurant never came to fruition.

No records show who owned this forgotten plane, or how it came to be here. It seems more likely that it moved rather than crashed, as no newspaper records tell anything about it. The NAMC YS-11s in general have quite a doomed history. Of the 182 originally built by the NAMC in Japan, there have been over 20 hull loss accidents, leading to over 260 deaths. One of the planes, run by Korean Air was hijacked in 1969 over North Korean airspace; the plane, its crew and passengers are still held in North Korean territory. In 1976 one of the planes owned by Olympic Airways crashed into the side of a mountain in Kozani, Greece. The history of the planes is one of forced landings, overshooting runways, and being ditched at sea. For now, the former Air Aruba plane falls gradually into ruin as the tropical forest slowly grows around it.