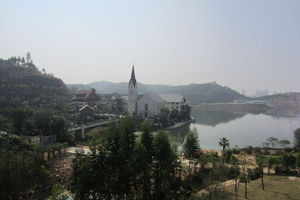 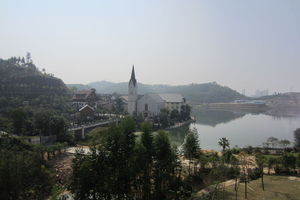 The beautiful Austrian village of Hallstatt looks like the picture perfect postcard image of a traditional European town full of gabled homes and historic churches. Now this lovely view can also be found in China where an exact replica of the village has been built as a high-end housing development.

Austria’s Hallstatt has a rich history dating back hundreds of years which can be seen in the historic, UNESCO-protected architecture that makes up the small town. However China’s Hallstatt, located in the Guangdong Province, only dates back to 2012, but looks almost just as ancient. The lovely little town was copied by the China Minmetals company who recreated some of the homes, decorations, and even the central church building as part of a novelty housing development for the wealthy who, assumedly, could not get real estates in the real Hallstatt.

Hallstatt, China is the next evolution of the Chinese trend of replicating landmarks from other places in the world. From scale replicas of the Sphinx and the Eiffel Tower to navigable Venetian canals, China has an ever growing number of knock-off wonders, and the recreation of an entire village is simply the grandest yet.

While the entire village has not been replicated yet, construction on the site continues and one day soon visitors may find themselves a bit turned around as to whether they are in China or Europe.