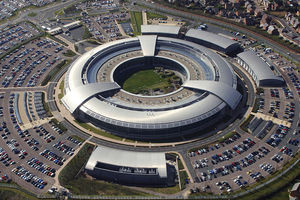 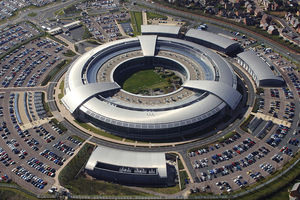 While the NSA is notorious for spying on the American people, Britain is no stranger to it either thanks to the Government Communications Headquarters (GCHQ) which serves much the same function as the NSA across the pond, and their base of operations is a space-age circular compound nick-named, “The Doughnut.”

Sitting in a suburban area that stands in contrast to the spy’s nest at its heart, The Doughnut is one of three headquarters devoted to the British Intelligence services. Built in 2003, the futuristic complex has come to symbolize governmental spying in Britain in much the same way that the Pentagon is seen as a symbol for the US Military. It consists of three-linked sections that each stand four-stories tall, all encircling a central courtyard. Since spying is a boom business these days thanks to all of varied forms of communication, the main ring building was soon bursting at the seams with GCHQ employees and small set of ancillary buildings were also added to the site.

In addition to its cute nick-name, the building is run through with a central walkway that employees have dubbed, “The Street,” because compounds for massive espionage agencies can’t have too many pet names.

Today he secretive spy ring (pun intended) houses over 5,000 GCHQ employees who toil away at surveillance tasks to keep the people of Britain safe, privacy be damned.