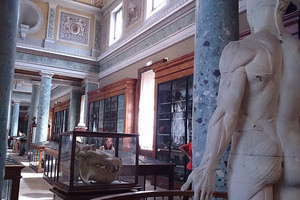 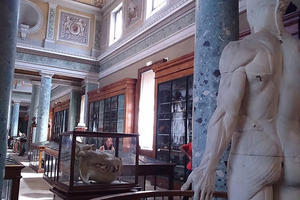 The historic Musée d’Anatomie de Montpellier (roughly the Conservatory of Anatomy in English) displays a number of unsettling anatomical specimens including the central figure of a literally muscular man digging with a shovel.

Established in the 1790s at the decree of the French government, the collection was originally meant as a training tool for surgeons. The historic collection was outfitted with formaldehyde specimens in jars, anatomical models, and animal skeletons for prospective doctors to study and learn from. Since its inception, the collection has grown and now sits in a lovely gallery space divided by elegant marble columns.

The Conservatory now holds over 5,000 specimens with the deformed little figures and assorted parts floating in yellowing fluids and wax figures becoming ever more delicate.

In addition to the gruesome medical leftovers lining the shelves and glass cases there is also a surgical theater that was built in the early 1800s that guests can explore, dreaming of the grim scenes that probably led to many of the pieces in the gallery.