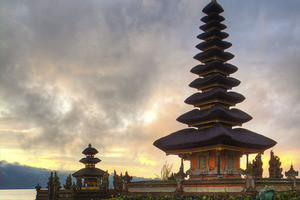 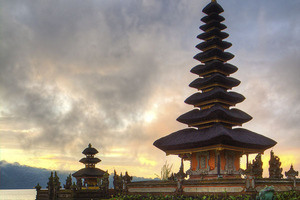 Bali’s Pura Ulun Danu Bratan temple pokes up out of the waters of Lake Bratan as though it is simply the peak of some much larger temple just beneath the water, and while it is as starkly humble as it seems, its importance to the community would seem to back up that grander fantasy.

Built in 1663, the pair of relatively small pagodas that sit on the lake’s waters act as the mother shrines to a countless series of smaller shrines set up at various points downstream from the lake. The lake itself has been the main reservoir for a large portion of central Bali for ages and is thus not only functionally very important but also holy to many. In order to keep the waters clean and flowing, the temples on the lake are devoted to the goddess Dewi Danu whose demesne includes rivers, lakes, and other waters. There are also fertility idols at the site of the temples due to the area’s legendary potency and virility which is also attributed to the waters of the lake.

Visitors to the Pura Ulun Danu Bratan site will first pass through an ornate temple structure on land before being able to board a canoe directly to the pagodas which seem to almost float right on the water. However the little buildings actually sit on a pair of small lake islands however the visual effect is nonetheless impressive. The temples are a popular site among those looking to take in Bali’s most beautiful temples, but the meditative quietude of the lake back drop is likely enough to make up for the presence of any strangers.