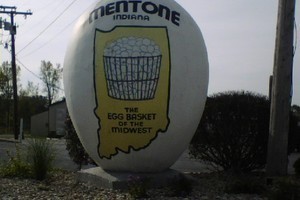 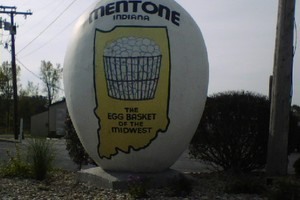 Balanced on the tapered end of its elliptical surface, the Mentone Egg is a bizarre monument that honors not only the town’s rich history egg production but also claims to be the largest egg in the world.

Sitting right near the edge of town, the huge cement ovum was created in 1946 by a group of local tradesmen in order to advertise an “Egg Show.” Originally the plan was to craft the egg from thin sheet metal but it was decided that the monumental embryo would be made from concrete, weighing in at around 3,000 pounds. The novelty was painted white and the slogan “Mentone, the Egg Basket of the Midwest” was drawn across the surface, finally owning the strange monicker. After its initial promotional installation, the egg was installed at its current location on donated land at the meeting of Main and Morgan Streets.

The town’s fixation with its eggy industry extends to a yearly “Egg Festival” as well, but the concrete monument remains the focal point of the area export. While it can in no way be verified, the proud locals claim that theirs is the largest egg in the world. Its possible that this claim is correct, but if it is not and a larger egg is created or discovered, poor Mentone will sure have egg on its face, leader of Midwest egg production or not.