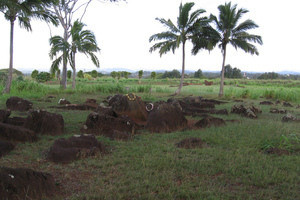 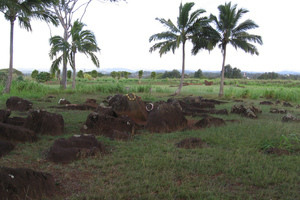 One-hundred yards from the intersection of Whitmore Avenue and Highway 80 on the Hawaiian island of Oahu lie a group of rocks known as the Kukaniloko Birthing Stones which have marked the site of royal births and powerful struggles for centuries, but which may have also served a secret astronomical function.

Located near the geographic center of Oahu, the Kukaniloko birthing stones were placed in a spot where the ancient islanders believed the life force of the land was strong. When a new chief was to be born, the mother would be brought to the rocks and under the watch of anywhere from 36 to 48 chiefs, the birth would take place. Most of the leaders were there to observe the births for the oral historical record, but a small number also assisted with the birth. When the birthing was complete, the child would be swept away, not to be seen by the mother until it had reached maturity. This was practiced to reduce the chance of murder from rival chiefs.

The important spot was also home to a number of battles between tribes that would decide the fates of their entire communities.

While the stones have thought to have served a largely ritual purpose to the tribal Hawaiians, recent research has uncovered patterns on the rocks that could have served an astrological purpose. It is now believed that the stones may have acted as a sort of Pacific Island henge.

In the modern day, rows of other stones have been added to represent the ranks of chiefs that would come to witness the births or defend their land, but the original stones also still rest on the site, waiting to usher the next big Kahuna in to the world.