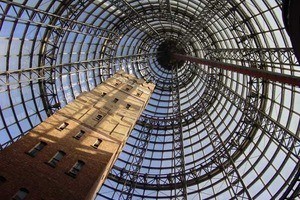 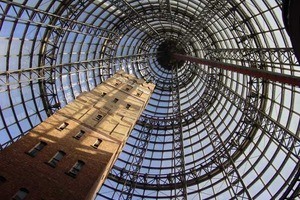 Once the tallest buildings in all of early Melbourne, Coop’s Shot Tower was soon eclipsed by gargantuan skyscrapers and other modern urban behemoths, but rather than being torn down in the name of progress, a giant cone was built over the historic bullet factory to keep it safe.

Originally built in 1888 the tall brick tower was used to create shot pellets. Such structures were not uncommon during the era as the process of creating the little steel balls involved letting droplets of molten metal fall the length of the tower into pools of water that would flash form them into their spherical shape. During its heyday, Coop’s tower could produce around six tons of shot a week. Luckily, the need for so much fire power dwindled over the years and the site diversified into other metal works. While the tower was never abandoned, the metal working at the site eventually ceased and the 164-foot tower became just a landmark.

Rather than letting the old spire crumble, in 1991 a giant cone of black steel and glass was built over the tower, completely enclosing it. A museum regarding the history of both the tower itself and the history of Melbourne in general was opened inside the building. The museum has been kept remarkably well updated with new technologies such as gesture-controlled displays being installed in the historic tower.