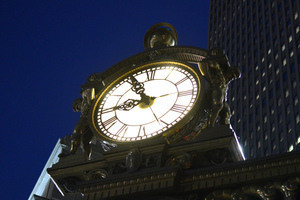 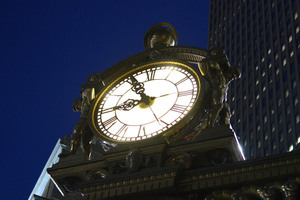 A century-old landmark timepiece in downtown Pittsburgh known as Kaufmann’s Clock has been acting as a meet-up spot for everything from weddings to kiss offs down its long, brass history.

An ornate bronze 2,500 pound clock replaced a previous clock on a post at the corner of Smithfield Street and Fifth Avenue in downtown Pittsburgh in 1913, the site of the flagship store of the local Kaufmann’s department store chain. In a central location in the district, this corner was and continues to be a popular meeting place. The clock was declared a landmark in 1981. A wedding even took place under the clock in 1996.

The clock also plays a part in an old, and quite rude, Pittsburgh colloquialism. Even political rivals would use it, as in 1983 when Pittsburgh City Councilman Eugene “Jeep” DePasquale told Councilwoman Michelle Madoff that if a voluntary levy she proposed would raise more than $20, he would kiss her “you-know-what” under Kaufmann’s Clock. When donations reached $1,500, Madoff challenged him to make good on his word, but DePasquale declined saying that it would be undignified.

The clock was dismantled for cleaning and repair in 1987. Over 70 years of exposure to Pittsburgh’s notoriously sooty air and the whims of pigeons left a grimy coating on the bronze that industrial cleaning solvents were unable to remove. The layer was so thick that equipment used to clean bridges was needed to strip the thick film off. Over 1,000 ground-up corncobs were used to sandblast the weathered metal to the restored state it remains in today.

The May Company bought the Kaufmann’s chain in 2006, and converted all of its stores in the area to Macy’s. However, the people of Pittsburgh still know this clock as Kaufmann’s Clock, telling the time over a popular corner in Pittsburgh.