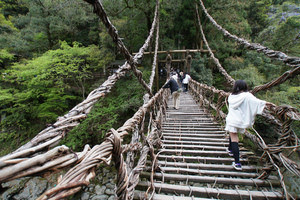 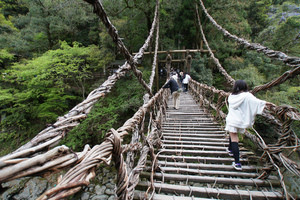 Stretching across the shallow Iya valley and the river below, the Iya Kazurabashi Bridge looks as though it may have simply grown in place, but in fact the hardy span is made by humans every three years using only local vines as rope (and in modern time, a few safety bits).

No one is sure exactly who first created the vine bridges that reach across the Iya River (there were at least 13 at one point), although a couple of popular theories exist, both steeped in folklore. One tale says that the bridges were created by spiritual figure Kōbō-Daishi, the founder of Shingon Buddhism. Assumedly he came to the impromptu solution while traveling in the area and the idea caught on well enough to become a tradition. The other school of thought is that the bridges were originally the work of the legendary Heike refugees who would have built the bridges while fleeing from the Genji Clan, in search of a safe place to settle down. The idea was that the bridges could be easily cut down, turning the river valley into a naturally impassible barrier to their enemies.

No matter the true origins of the awesome natural constructions, local artisans have continued to keep the bridges alive, and while the number of bridges has dwindled to three, they are no less amazing. The largest and most accessible of the spans is the Iya Kazurabashi Bridge which reaches almost 150 feet across the valley at a height of almost 50 feet above the water.

Today the bridges are still woven almost entirely out of natural vines and wooden planks, although there are steel cables running through the main railings, hidden beneath the vines, just to be safe.