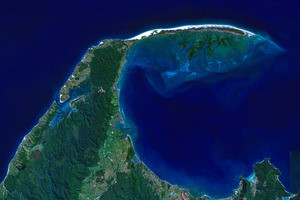 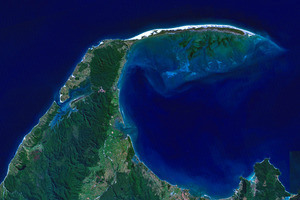 Splaying off from the northern tip of New Zealand’s southern island, the skinny little beach known as Farewell Spit is a lovely and remote piece of nature that seems to call to whales who are looking to kill themselves.

Despite what one might think, the name of Farewell Spit (called “Onetahua” by the native New Zealanders) does not refer to saying goodbye to the scores of whales that have run aground on the sands over the years but is actually a reference to nearby Cape Farewell, which was named such for the traditionally sentimental reasons. In fact there does not seem to be any reference to the many mammals who have died there over the years, only when the aquatic giants are laying there drying out in the sun would someone guess how deadly the spot is. Since anyone started recording such a statistic, 680 whales have died from stranding themselves on the spit. In 2015 some 200 whales beached themselves on the sand, although many were able to be floated back out to sea by concerned activists and the tides.

No one is exactly sure why whales strand themselves in general, although it is thought that near Farewell Spit it has to do with the shallow waters surrounding the sands interfering with their natural navigation. The clear social bonds between whales may also play a factor with just a few whales creating a tragic chain reaction that lead to dozens of grounded giants.