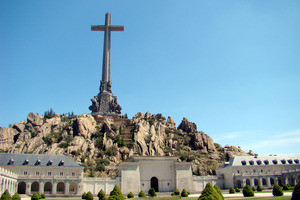 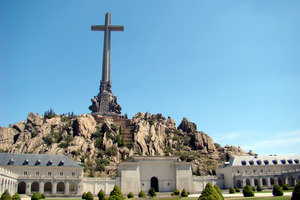 A tragic number of soldiers perished on both sides during the Spanish Civil War of the 1930s. As both a burial monument and as a memorial church, the epic Valley of the Fallen (Valle de los Caídos) was created by Spanish dictator Francisco Franco, and despite its intended purpose, many still see it as a symbol of the despot’s abuse of power.

The monumental complex is built on and into the slopes of a Spanish mountain range and features a number of components. The courtyard is spread out at the base of the mountain in a wide arc featuring grand porticoes, while the church proper is actually built into the hillside. Inside, the actual church space is a long space that extends back into the granite mountain. In addition a number of imposing angel statues, the church actually holds Franco’s crypt as well. Topping off the entire affair is the colossal 500-foot cross that extends from the tip of the mountaintop. This too features titanic figures hewn into its base, and can be seen for dozens of miles around.

At Franco’s behest, the construction of the Valley of the Fallen began in 1940 and continued over the next 18 years, finally finishing in 1959. The bodies of over 40,000 people who died during the civil war were lain to rest within the valley and Franco hailed his creation as a work of healing for the ages. Unfortunately no everyone felt the same, many accusing the leader of forcing political prisoners to labor on the construction, which itself was also seen as a colossally unnecessary and expensive show piece.

Despite the possibly troublesome origins of the Valley of the Fallen, it still manages to retain a monumental sense of awe even if it is a fascist masterwork.