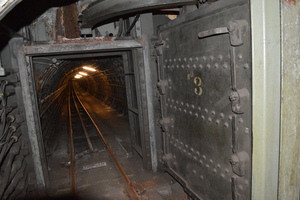 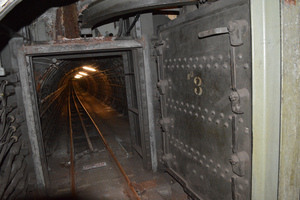 Running beneath the feet of unsuspecting Londoners is an ever-clanging railway that quietly (at least on the surface) secrets parcels, missives, and other mail from one sorting station to another. This purpose-built system is known to most as the “Mail Rail.”

Officially titled the London Post Office Railway, the system of two-track tunnels was first planned in 1911 but did not actually begin moving mail until 1928 due to labor and materials shortages that halted construction of the tunnels. However when they were finished, the relatively tight rail tunnels connected eight separate stations from Paddington to Whitechapel where email would be uploaded and offloaded and brought to post offices above. As time went on the cylindrical little trolleys were eventually completely computer automated and the post simply traveled around underground in a little robot network.

The Mail Rail kept chugging along through most of the 20th century, but by 2003 it only visited three of the original stations since many of the postal stations on the surface had moved. It was later that year that the tiny tracks were put out of commission after the costs of keeping the system running became too great. For a short time the powers that be were simply going to abandon the rails, it was eventually decided that portions of them would be opened to public as a museum of sorts.

Today, anyone who visits the old, hidden rail line can see the little cars that used to ferry the mail across the city, unbeknownst to nearly everyone above.