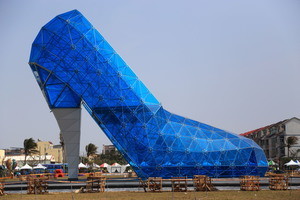 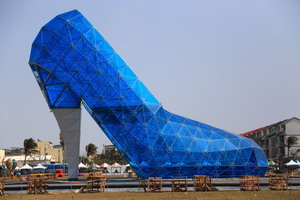 Standing on a large concrete disc in Ocean View Park, in Taiwan’s Budai township, is a massive glass slipper that looks as though it would be fit for a giant Cinderella. But in actuality this strange building is a church meant to cater to women. Or to reference a local legend. Or something.

Finished in early 2016, the giant shoe church is an all-glass structure, formed out of 320 blue-tinted panes, set into a metal grid. The main worship space is held in the toe with a large screen at the tip, while there is an outdoor stage built into the collar where someone’s giant foot might go. While it is being called a church, officials say that its main function will be to cater to weddings and photo shoots. In addition to its questionably female-centric architecture, the interior of the worship shoe is said to include over 100 features that women will like, they guess, including love seat benches, biscuits and cakes, and maple leaf decorations.

And before anyone gets to thinking that all of this is just to pander to women, there is a second, more traditional  reasoning behind the design of the church. Apparently it is actually an allusion to a local story of a girl who caught Blackfoot. As the story goes, this local girl contracted the disease and had to have the lower portions of her legs amputated, ending her engagement, and resulting in her spending the rest of her days alone and living in a church. Jesus. (Pun intended.)

Whether the high heel shoe church is meant to be an outdated clarion call to women, via their stereotypical love of shoes, or a huge monument to a tragic tale, it is certainly something to behold.