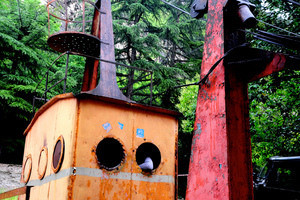 The city of Chiatura, Georgia was founded among otherwise uninvitingly steep valleys and deep gorges thanks to a healthy vein of manganese that was ripe for the mining. However the treacherous terrain was too difficult and inefficient for mine workers to traverse on foot, so the Soviet government installed a precarious network of dangling cable cars that are still in use today despite a troublesome lack of maintenance.

Founded in the late 1800s as a mining colony, Chiatura quickly became a popular source for manganese and iron that was being taken from the rich mountains in the area. Unfortunately, having workers travel from their communities at the bottom of the hilly gorges and canyons up to the various mining sites each day was incredibly time consuming. So in an effort to get those bodies into those mine tunnels faster, a criss-crossing system of cable cars was installed by the Stalinist government. The productivity and output in the mines dramatically increased with the high-flying “metal coffins,” which were also able to carry the ore itself directly to waiting factories.

The ubiquitous cable cars remained in use over the years and the local people, now used to the cars, have continued to keep the cars in operation, riding high above ground en route to various parts of the city. Alas, the upkeep of the cars and stations did not quite keep up with the use.

Today the aging cable system is still in regular use with at least 17 of the stations still active. However the cars have aged and rusted dramatically over the years and nearly all of the stations have deteriorated to ramshackle conditions, being kept up, conducted, and occasionally repaired by amateur engineers. Regardless of the dangers posed by the crumbling infrastructure, local travelers brave high-wire peril on a daily basis.