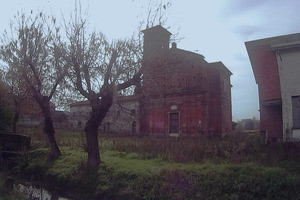 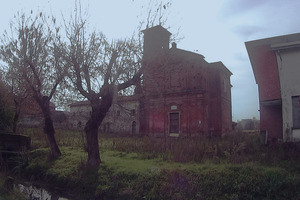 The small town of Leri Cavour has changed hands a number of times during its centuries worth of history, but today it seems that no one wants to take responsibility for the once promising community so its once stately buildings are simply falling into decay.

The area that is now known as Leri Cavour has long been an exemplar of agricultural growth. Having been the site of a religious order as far back as the 15th century, the land was used to grow grain and other crops as the farmers’ processes evolved. The rural production thrived until the land was acquired by Napoleon who then sold it off to help pay a debt, which is how it found its way into the hands of the Marquis Michele Benso di Cavour whose name would be added to town that sprang up in the future.

Cavour went to work updating the buildings and farming processes on land, establishing Leri Cavour proper including an intricately decorated mansion. The town became a state-of-the-art farming community by the mid-1800s. Unfortunately this was not to last as stewardship of the land was passed around between a number of people, which proved to much for the town to survive. By the late 1960s, Leri Cavour was abandoned.

Despite a number of proposals as to what to do with the land, on which a number of the former town’s buildings still stand, Leri Cavour remains abandoned today. Most of the structures have been looted and damaged including the formerly grand Cavour estate. The empty town feels eerie and the nearby nuclear cooling towers that now dominate the skyline in the area just make it seem more like an atomic apocalypse.